In Z’s bio for this blog he calls himself a “disabled person.” It doesn’t seem like a big deal, but within the first few weeks of the blog being out we had already received a number of emails asking why?

This week we decided to do a little Q&A about why Z chose this wording:

R: So, were you surprised when people reached out about you calling yourself a “disabled person” in your bio on the blog?

R: Did you ever consider switching it to “person with a disability?” Changing the wording?

Z: No... I guess because it’s such an important part of my life, even on my dating app profile I was putting that I am disabled, and putting it front and center. I know some people say they don’t want their disability to define them, but it’s basically defined me.

R: Do you think that’s a bad thing, for it to define you?

Z: No. I think it’s just how life ended up, you know? So I should just let it be.

R: So, I was surprised when I looked at your Instagram for the first time, forever ago, and that was the first thing in your bio on there too, that you’re a disabled person. So, do you want to talk a little bit about why that is the first thing that’s in your bio? I know you just kind of talked about it, but expand.

Z: Yeah, I guess just to reiterate, let’s see, where do I want to go with this? ...I mean, yeah, as I said, my disability is a very integral part of my life, [bird, I think that was an owl] it’s affected how I exist. Which is to say, because of my disability I have lots of pain every day, physical and muscular pain and I take pain meds for that, and my pain level can really affect my emotional state, it can make me tired. And also, because of my disability, I have sleep apnea, which makes it so I don’t sleep as well, and causes me to be tired during the day, and really affects how I am able to exist in the world. Like, I can’t do as many physical tasks. In fact, most physical tasks I can’t do. And it even affects what I consider my livelihood, which is graphic design. I can only do so much work in a day and I work a lot slower and I can’t do as much as a regular graphic designer, even if I might have the same skills as them. So yeah, as you can see it’s basically… I think at some point someone said that disability’s sort of like this shadow. It’s… how do I describe it? This shadow self that’s always there, that you can’t get rid of, that’s always affecting everything you do. It’s not removable and to pretend that it’s not what defines you, I think is ridiculous. It’s clearly something that defines a person. So, I don’t know, I guess for me it’s something that defines me more than someone with a less extreme disability. It affects them, their disability, but it’s maybe less extreme than the extent that it is for me.

At this point in my questioning I’m feeling like I’m starting to get where Z is coming from. I feel like he’s right that the extent of his disability comes into play. Z’s disability has been a part of him his entire life and, in many ways, has defined his journey through life. When I was young I got to discover what I liked as I grew up, I became an artist, then a writer, then etc. and I list my descriptors in that order, but Z was a disabled person before he was anything else. It’s similar to how I was a woman from the moment I was born, it would feel silly for me to say I’m an artist, writer, and person who is female. Instead I just say “I’m a woman,” or "I'm a female artist." That comes first in my wording because it was a part of my identity first and everything else that I am, whether I realize it or not, was influenced by that given identity. So perhaps for somebody who acquired/developed a disability later, they might be able to put other identities first, but they also were able to develop themselves independent of disability. I tried to say all of this in my next question, but it came out a bit jumbled.

R: Yeah, I mean, I guess it’s interesting because, like, so in your instagram bio you have like a list of things that you do and that you are. Like identities, like artist, graphic designer, blablabla... Those are all things that you do, and I feel like you probably ended up doing what you do partially because of your disability. Like, it influenced what you did with your life, so it’s kind of like the base that you built things on. So it’s kind of interesting that you have it first... Because it is sort of your foundation. And it was, like, maybe the first thing that you were because you knew about it and were being affected by it at a young age. Like before you really knew what you wanted to do with your life you knew that you were disabled so, yeah, it’s interesting. So what do you think of, you mentioned this a little, but what do you think of people saying “don’t let this define you/ you can overcome/ be whatever/ whoever you want to be.” What do you think of that type of rhetoric?

Z: I mean, I doubt people will agree with me on this, but I think it’s kind of ableist. Like telling kids, “Oh yeah you can be whoever you want to be. We’ll make sure you can do it?” Really, it’s not true. I’ve had to make many concessions because of my disability, even though people told me “Yeah, you’ll be able to do whatever you want.” No. I wanted to be a filmmaker when I was young. I thought “oh yeah, that’s going to be my career. I’m going to make amazing movies, and everyone’s going to love them, and I’m going to go down in history as one of the better film makers.” But I went to school trying to learn how to do film stuff and I realized this is clearly not for me because I can’t really operate a camera, I can’t really go to most set locations. I mean, I could be a writer if I wanted to, but like, that’s the only thing I think I could do. And then, graphic design is something I want to do, but like I’m realizing I can’t really do a job that makes me move. Like, I need to work where I live, that might mean that I have to work remotely or with a graphic design firm at a place that’s in Ithaca, which is where I live. You know, I can’t really overcome the disability and not let it define me as we were talking about before. And I just feel like it confuses kids with disabilities when you tell them “You can achieve whatever you want.” I don’t really know how to tell kids “I’m sorry, but you’re not really going to be able to do everything you want to do” in a nice way. But I’m not a parent so maybe if I were a parent I would be able to tell my kid “you won’t be able to achieve everything you want to achieve, so you have to make concessions.”

So, in conclusion Z’s disabled identity is important to him. It permeates every aspect of his life as an obstacle and an identity. Z has other interests of course, he loves playing video games and chess, loves music, both listening to it and making it, he loves graphic design and digital art, and understands building websites more than I ever could, but in each of those things he can’t escape being a disabled person. His shoulders get sore and tired, he has to fit his mouse under a curled hand, his keyboard feels miles away, his brain is overloaded with PCA schedules, doctor’s appointments, and disability adapted rituals of living.

I sometimes joke, “You would be such a bro if you were able-bodied.” Or, after watching the first episode of F*Boy Island, “do you think you’d be an f*boy if you weren’t disabled. Like any of us, given circumstances have affected the person Z became. Z is a different person because he is disabled, there’s no denying that. Though different from what person? There’s no knowing.

Z and his disability are irrevocably intertwined. 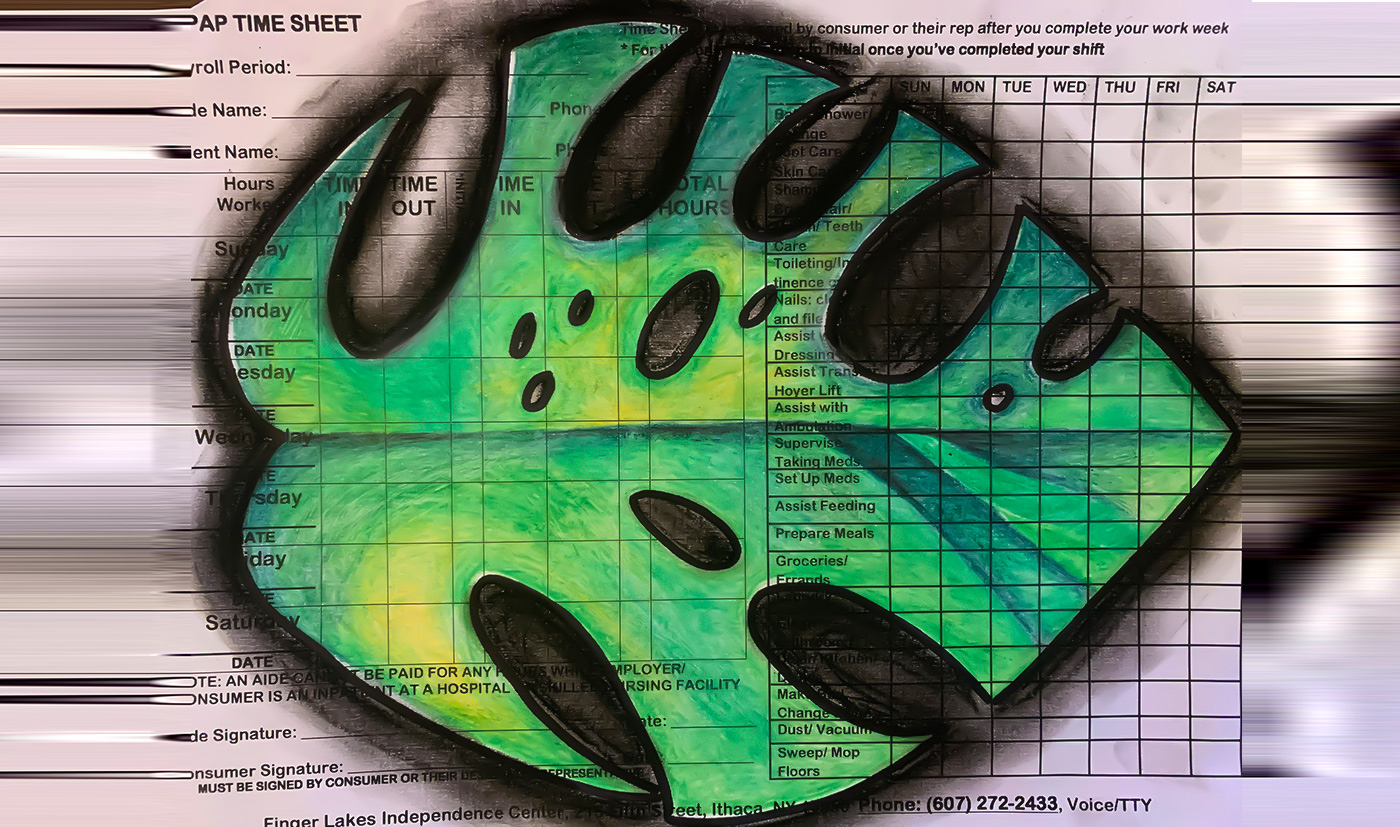